Bumthang or Jakar Valley is said to be the religious legend and believed to be a sacred place of Bhutan Kingdom. Bumthang Valley is situated at an altitude of 8530ft to 14765ft which comprises of four sacred valleys which are popularly known as Tang, Ura, Choekhor and Chumey. These valleys are all blessed with the ancient Buddhist Monasteries. Among all these Ura valley is said to be the highest of all and best for hiking and is considered to be the home of earliest inhabitants of Bhutan. It is believed that it was in Bumthang Valley where Buddhism was first introduced in Bhutan. Each of these four valleys of Bhumthang Dzongkhag has their own dialect. Brokkat the endangered Southern Bodish Language is spoken in the village of Dhur of Bumthang Valley.

The Bumthang valley forms the best place to be explored by foot so that you can view each and every part of nature surrounding Bumthang Valley and explore the beauty of nature with its flora and fauna. The hilly slopes consist of different species of medicinal plants and flowers and also forms large number of picnic spots. The scenic hike of Bumthang Valley will bring you more close to the culture and traditional rules of the ancient Bhutan. Lots of tourist spots which mostly constitute the historical monasteries make the land of Bhumthang Valley.

How to reach Bumthang Valley:

Paro being one and only international airport of Bhutan connects Bhutan with the other places of the world so if you are travelling by flight then you can get the service of Drukair the domestic flight which will take you to Bumthang from Paro airport and if you are travelling by road then you can reach Phuentsholing via Jaigoan. To reach Bumthang Valley from Thimpu you need to travel 271 kms by road which may take about 8 to 9 hours.

The tourists visit the Bumthang Valley almost every month of the year. Tourism flourishes in this place throughout the year. However winter season marks the best time to visit Bumthang, weather seems to be pleasant and you will enjoy your sightseeing and outdoor activities.

Places to visit in Bumthang Valley 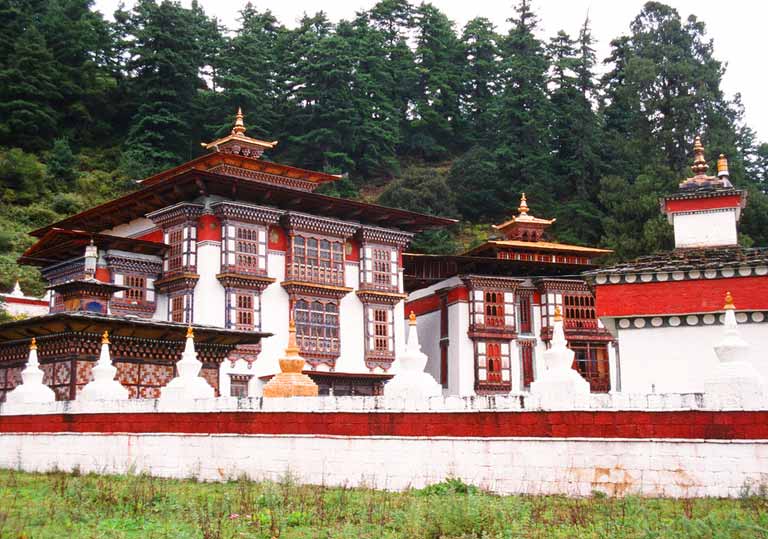 Kurje Lhakhang or a Monastery is one of the famous sightseeing spots of Bumthang Valley which is located opposite to Tamshing and Khonchogsum lhakhang on the right bank of river Chamkhar. Kurje Lhakhang is believed to be one of the sacred places in Bhutan, it is well said that Guru Rinpoche meditated in this place and left the imprint of his body in the rock. This is the reason behind the name of this monastery as in Bhutanese term body means ‘ku' and rock means ‘je'. The construction of Kurje Lhakhang took place during 8th century. Kurje Lhakhang has a large majestic body which has the remains of Bhutans first three Kings. The monastery is surrounded by the enclosure of 108 Chortens which give a beautiful view surrounding the three buildings of Kurje Lhakhang. These three buildings of Kurje Lhakhang face the south. The first building which is said to be the oldest stands on the right side which is also said to be the place where Guru Rinpoche meditated, the second building constitutes of monumental statue of Guru Rinpoche and the third building was constructed in 1990 by Dilgo Khyentse Rinpoche. 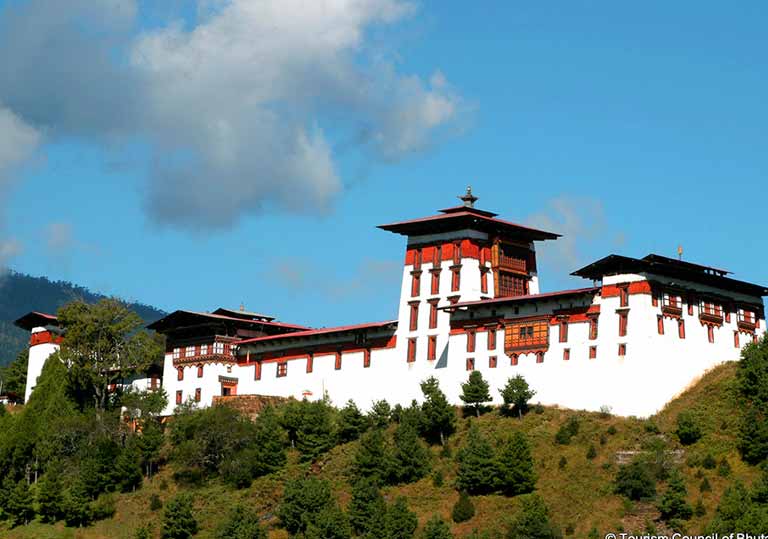 Jakar Dzong is located above the Jakar Town in the hill top in the Chamkhar Valley of Bumthang. Jakar Dzong literally means the ‘Castle of White bird' with huge walls, amazing structure and simple interior. Jakar Dzong is also known as Jakar Yugyal Dzong which is one of the largest Dzong of Bhutan having a surrounding circumference of more than 1,500 meters. The location of Jakar Dzong is one of the best attractions for the tourist visiting Bumthang Valley. The present structure of Jakar Dzong was built in 1667 and the official name of Dzong is ‘Yuelay Namgyal Dzong'. It is also said that the Jakar Dzongwas is the administrative seat of the first King of Bhutan. The surrounding path of Dzong are stone paved which leads to the narrow entrance of the Dzong surrounded by the administrative offices. Beyond the monk quarters in the eastern courtyard lies the District court of Bumthang Valley. Most of the western end of Dzong is also surrounded by administrative offices and behind the main Dzong there stands the watch towers half a round which was used to view the enemies attack in the ancient times. Though the main chapel remains closed but don't miss to get the excellent view of Chokhor valley from the Jakar Dzong. 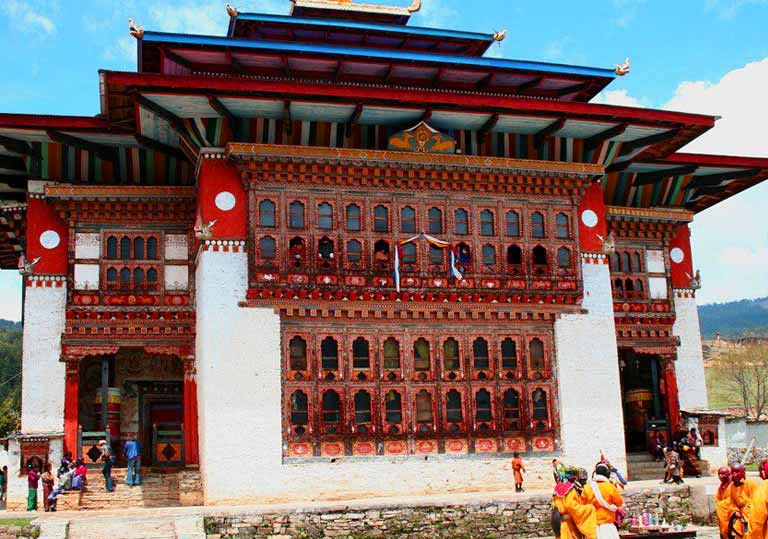 Jambay Monastery is also one of the sacred monasteries built by the Tibetan King Songtsen Gempo in 7th century. Songtsen Gempo had built 108 monasteries to chase away the evil spirit from the Himalayan region and Jambay Lhakhang comes under one of these monasteries. The structure and architecture of the monastery seems to be dated from the early 20th century. Jambey Lhakhang stands on the way to Kurje Lhakhang and just 10 to 15 minutes of drive from Chamkhar town. Jambay Lhakhang contains more than 100 statues of God Kalchakra which was built in 1887 by the first king of Bhutan. One of the most populous festival of the country known as Jambay lhakhang Drup is celebrated here in Jambay Lhakhang for five days. People from different corners of the country as well as tourists from other countries come to attend this festival. The lhakhang has been renovated for many times and is one of the popular tourist visiting sights of Bumthang Valley. Lhodrak Kharchhu Monastery is located in the eastern hills of Jakar Valley in the left side of river Chamkhar and is one of the popular places of sightseeing in the Bumthang Valley. The monastery was established in 1970 by Namkhai Nyingpo Rinpoche who was introduced in the very young age as H.H Dalai Lama. Lhodrak Kharchhu Monastery is one of the largest Nyingma Monasteries of Bumthang Valley where you will find huge number of monks residing. The assembly hall of the monastery has a huge statues of Shakyamuni (Buddha), Guru Rinpoche and Chengresig. The Monastery has been making a great effort to preserve the religion as well as culture of Bhutan. Large number of monks comes in this monastery to attend their higher studies. The monastery usually offers three different streams of higher studies known as Shedra (course work), Drupdra (meditational aspects) and monastic rituals. The monastery has been an important place for the Bhutanese monks where they can complete their higher studies. Architecture and structure of Lhodrak Kharchhu gives the touch of Tibetan art and culture. The Paintings of the main hall and residential hostels are all structured in a Tibetan architect.