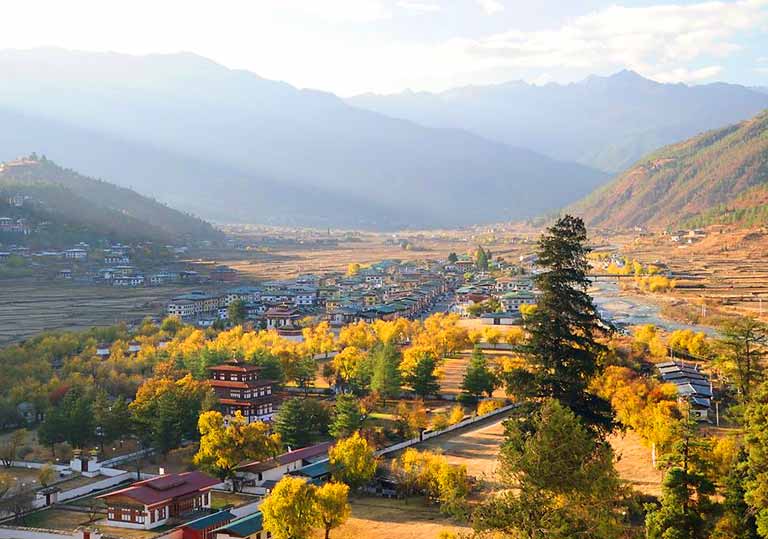 Paro is a small charming valley which lies at the banks of Paro Chu at an elevation of 7,200 ft. Paro has a traditional architectural structure of its buildings along the main streets of the town which are beautifully painted and decorated. The small wooden shops and restaurants with traditional outlook are eye catching which are colourfully designed. Paro has been the best town in Bhutan to explore. It presents a pleasant valley giving the unique touch of Bhutanese culture and traditions.

The picturesque valley of Paro is also said to be one of the largest valley of Kingdom of Bhutan with the most fertile land. Lots of Monasteries and historical forts are found in Paro Valley so it can be said that if the sightseeing of Paro is skipped the Bhutan tour remains incomplete. Visiting Paro can be an unforgettable experience in your life. The natural beauty of Paro will touch your soul it is a perfect place to explore if you are a nature lover and love to travel.

How to reach Paro:

To reach Paro you need to travel 50.7 kms from Thimpu which may take about one and a half hour. If you are travelling from Phuentsholing you need to travel 160 kms by road which may take about 5 to 6 hours to reach Paro. You may hire a taxi from Phuentsholing and if you want to travel by bus then you can go to the nearby bus terminus at Phuentsholing where a number of buses are available or you may fly up to the Paro airport. Paro is the only place in Bhutan where you can find the international airport which makes Paro easily connected with the other parts of the world.

The spring season and autumn season are the best visiting time at Paro. During the spring time you will get the excellent view of forests covered with rhododendron flowers all over. Moreover, autumn being the festive season of Bhutan you will get an opportunity to view their festivals and the main part of festival includes the folk dance which is popularly known as ‘Cham Dance'.

Places to visit in Paro Taktshang Palphug Monastery is one of the famous tourist spot of Bhutan and the main attraction of Paro. Taktshang Palphug Monastery provides the most iconic view. This religious site is also said to be the landmark of Bhutan and Paro. Taktsang (Tiger's Nest) Hermitage is about 10 kilometres outside from the main valley of Paro which is believed to be highly sacred place for the Bhutanese people as it is said that Guru Padmasambava, the father of Bhutanese Buddhism had landed here on the back of Tiger and meditated for three years, three months, three days and three hours. Firstly this place was just a cave which was later built as a monastery as the saints from many places of the world come here for meditation. The Monastery Clings to the sheer on the rock face which is about 3000 ft. You can also trek over to Taktsang which takes about 3 hours from Paro. Trek to Taktsang can give you a majestic view of Paro Valley and Paro Chu. It is said that no trek to Bhutan would be complete without a visit to this holy place. The scenic view of Paro is one of the most excellent view from the Taktshang Palphug Monastery which will be one of the best memory and the memorable part of your tour to Bhutan 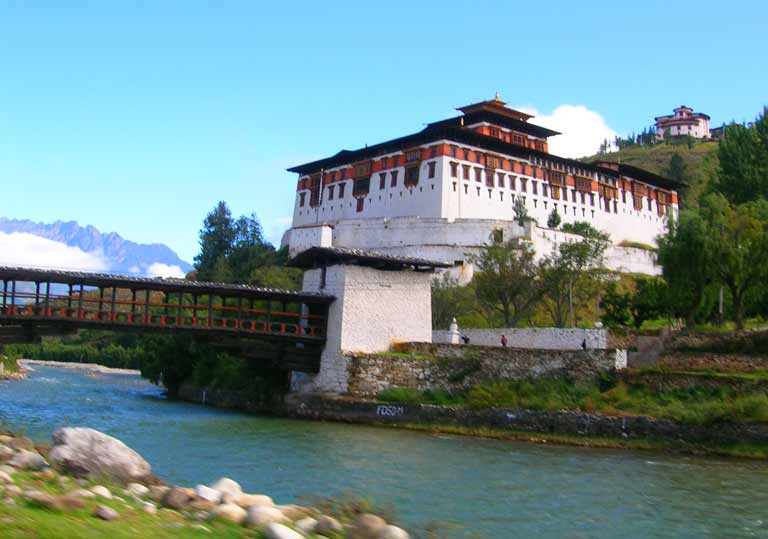 Paro Dzong 'fortress of heap of jewels' is the other most popularly known Tourist spot of Paro it has been built in a most impressive way which gives the finest example of Bhutanese architecture. Rinchen phug Dzong which is also known as Rinphug Dzong is the proper name of Paro Dzong due to its location above Paro Chu and Paro Valley it is popular as Paro Dzong. It was in 1644 the construction of Dzong began on the order of Zhabdrung Gnawang Namgyal. Paro Dzong is also one of the administrative seat of Paro Dzongkhag and the house of District Monastic body. The tradition and culture of Bhutan has a great impact on it. Paro Dzong is built on a steep hill and the walls of Dzong are visible from the Paro Valley. The fifth storey of Dzong is beautifully woodworked which looks beautiful. Nyamai Zam a traditional wooden Bridge which is on the west bank of the river Paro Chu gives the most picturesque view of the Dzong. Paro Tsechu which is said to be an annual festival or a festival of mask is held every year in the month of February from 9th to 15th. Most of the tourists come to visit this Dzong during this time. Thongdrol, a thangka is one of the most precious object of the Dzong which was saved during the fire is displayed annually during the Paro Tsechu. Lama Ngawang built this Thongdrol during 1906 which is said to deliver all the sins. 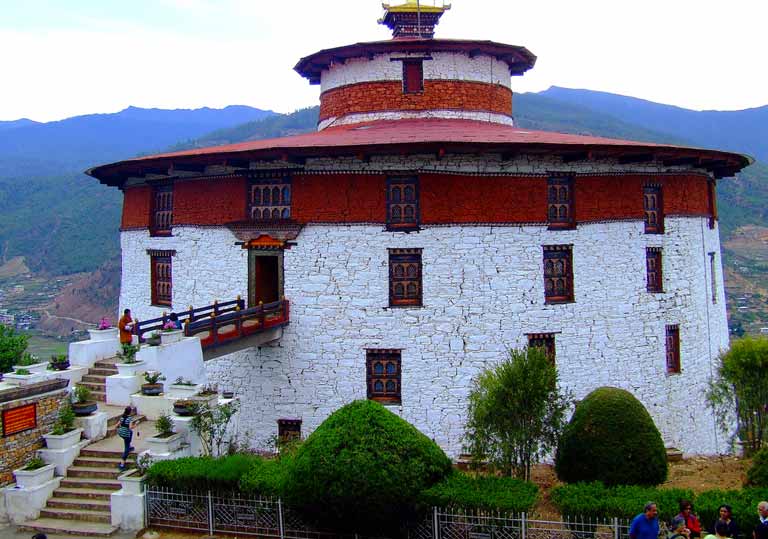 The National Museum of Bhutan is located on top of the hills above the Paro Dzong. The museum was designed in the finest Bhutanese art with masterpiece paintings and statue. The National Museum of Bhutan was an old watch tower which was later on renovated as National Museum in 1964. This watch tower was built under the order of King Jigmi Dorji Wangchuk, the third hereditary monarch of Bhutan Kingdom. The museum has a large number of visitors from all over the country as well as the outsiders visit this place. The museum is well known for its huge collection of old coins, handicrafts, festive masks of Bhutan wore during the cham dance, collection of both modern and the ancient Thangkas and history of ancient Kingdom of Bhutan. Tourists, students, scholars, connoisseurs are the ones mostly visiting the National Museum of Bhutan. The museum plays a major role in promoting the tradition and cultural lifestyle of Bhutan and Bhutanese people. The gallery of National museum also represents the collections of early stone carvings and the religious statue of ancient times which are gathered from different parts of country. From this museum you will get the idea of mask dance which they perform during their festivals. This museum is said to be one of the cultural heritage of Bhutan as more than 3000 items are kept in this museum which are more than 1500 years old and all represent the linkage between the ancient Bhutan with the modern Bhutan. 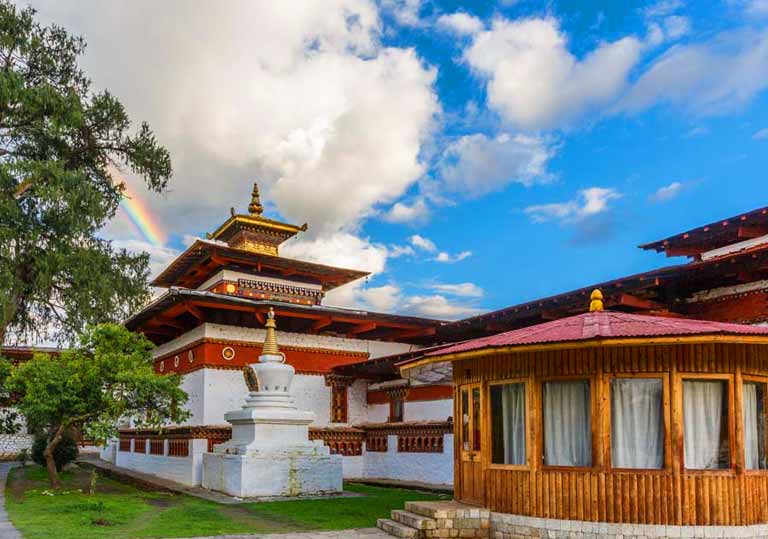 Kyichu Lhakhang is said to be one of the hidden gems of Paro which is situated in the small hill of Paro Valley. A short drive from Paro will take you to Kyichu Lhakhang which is on the north of the Paro town. Sherab Gyaltshen the religious head established the lhakhang in its former glory in 1839. The two Monasteries of Kyichu Lhakhang have a great historical value within it. The first one was built by Songtsen Gempo the Tibetian Buddhist king in the 7th century and the second monastery was built by the Queen mother in 1968 which was dedicated to Guru Rinpoche. The jowo temple of Kyichu is also said to be the oldest temple of kyichu. The Bhutanese people have the belief that the two orange trees in the garden of Kyichu bear fruits throughout the year. Originally Kyichu Lhakhang was a small structure but later on it was visited by the saints from different places including Guru Rinpoche which has brought the Kyichu in light.