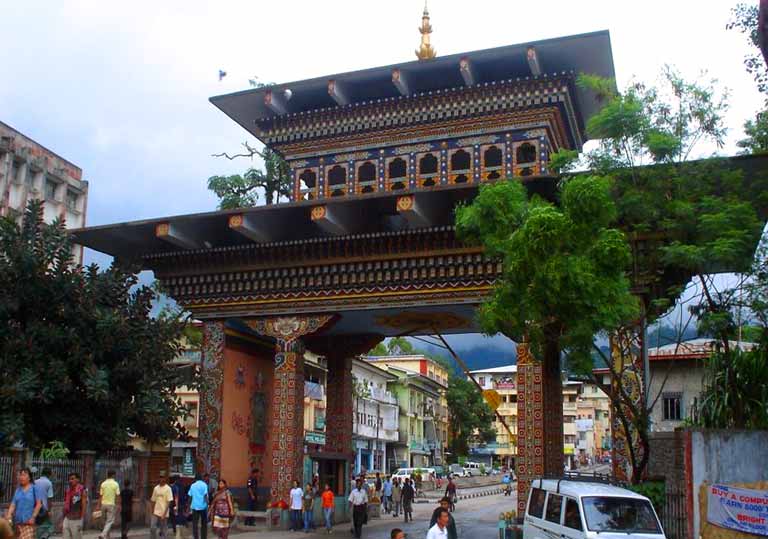 Phuentsholing, the commercial town of Bhutan is the frontier town which lies in the southern location of Bhutan in the Chukha district at an elevation of 961 ft. Phuentsholing, the border town adjoins the Indian town Jaigoan with Bhutan, which is only separated by a long single gate. Phuentsholing is the town with the headquarters of Bank of Bhutan. The location and the landscape of Phuentsholing make it more fascinating and beautiful. The large gate separating India and Bhutan also separates the culture and tradition of Indian and Bhutanese people. On one side lies the busy commercial town of India with the busy streets and shops while on the other side is the quiet and urbanised financial trading centre with its unique structure.

Phuentsholing is the junction of three different ethnic groups consisting of Bhutanese, Nepales and Indians. Buhtan Tourism is trying their best to improve the tourism in Phuentsholing as most of the visitors have their first eye on Phuentsholing as it acts as the entry point from where they start their trip to Bhutan.

How to reach Phuentsholing:

Phuentsholing has no rail route and air route, if you are travelling from India you can travel from the nearest major railway junction, New Jalpaiguri Railway Station on the other hand you can travel close upto Bhutan border by Hasimara railway station of India or if you are travelling through air then Bagdogra is the nearest airport, from there you can hire a taxi to reach Phuentsholing.

Seeing all the past records of climatic changes the month of February to April and October to December seems to be the best time to visit Phuentsholing. The temperature during these months is found to be most pleasant. Most of the tourists visit the place during this time of the year.

Places to visit in Phuentsholing It is one of the popular tourist visiting places of Phuentsholing which has a beautiful structural design both from inside and outside. Zangtho Pelri Lhakhang is a small monastery which is situated at the centre of city this monastery represents the heaven of Guru Rinpoche. The Lhakhang was built in 1990 by a great musician Dasho Ako Thongmi who also composed the national Anthem of Bhutan Kingdom. The Monastery has large paintings, murals and frescos which explain the life of Buddha. Do not miss the top floor as the top floor of the Monastery holds the main statue of Amitabha while the other floor contains the statue of Avalokiteshvara and eight Bodhisattavas. Morning visit would be the best time to visit the monastery as you will be able to view the Buddhist monks performing their rituals and offering their prayers to the God. The local people are also mostly seen in the morning times kneeling on their feet and remembering their God far from the crowd and busy life. The environment of the Monastery seems to be calm and peaceful. The Monastery is surrounded by the religious wheels on its every side. It is believed that spinning those wheels wash out all the sins. These wheels are spun in a clockwise direction during their prayer time. The spiritual and religious environment can be felt all around the monastery. 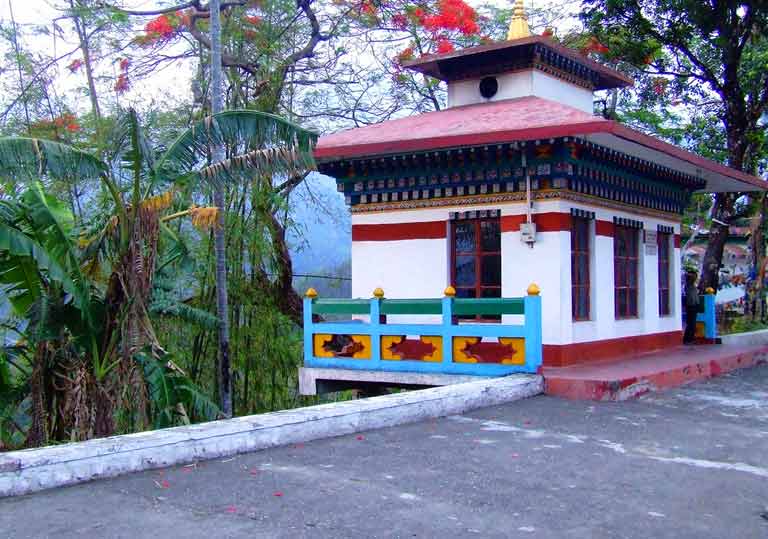 Kharbandi Goemba is the other famous attraction of Phuentsholing which is located above the town in a beautiful location surrounded by a fascinating garden and beautiful natural surroundings. Kharbandi Goemba is structurally planned in a beautiful way at an altitude of 400m, which was founded by the Royal grandmother Ashi Phuntshu Choedron in 1967. The statue of Guru Rinpoche and Shabdrung Ngawang Namgyal is one of the attractions of the Monastery. The garden outside the monastery is also one of the eye catching views which give the pleasant view of the surrounding hills and plains. You will experience both religious and natural environment of the monastery. The garden outside Kharbandi Goemba consists of beautiful Tibetan Stupas and it is said that each of the stupas was built in different Tibetan structure. Most of the tourists visiting this Monastery get the excellent view of the Phuentsholing town surrounded by hills and the plains of India. If you are visiting Phuentsholing then you should visit this Monastery without a miss.

Amo Chu is the crocodile breeding centre located behind the bus terminus of Phuentsholing at the banks of river Amo Chu. The centre was established in 1976 with only a few number of crocodiles. The name Amo chu Crocodile breeding centre was derived from the small river Amo Chu flowing on its side. The crocodiles are brought here to breed which are later on released in the national reserves. Different Species of crocodile with different shapes and sizes are found here. The breeding Centre looks after these crocodiles which includes taking care, breed the animals, feed the animals properly which are then moved to the National Parks and Wildlife Sanctuaries. If you are a wildlife lover then you should not miss this place while travelling to Bhutan. You can view the dangerous animals closely and in real. This small breeding centre of crocodile has been a place of interest for the local people residing in the surrounding areas. Bhutan gate has been the landmark of Phuentsholing and Jaigoan too. The gate and its structure represent the tradition and culture of Bhutan Kingdom. Bhutan Gate is the main gateway to Phuentsholing. It is one of the photographic locations for the tourists. The tourists visiting Bhutan usually start their first photography from this place which seems to be the most memorable part of their trip to Bhutan. Bhutan Gate is the single way of entry to Phuentsholing town. The gate separates the culture and traditions of Bhutanese people and Indians. Not only this, the gate separates the loud noise, busy streets with busy shops and people with the peaceful and calm town of Phuentsholing. The shops and streets are clear with less noise and people form less crowd. The flow of foreigners and the foreign goods and commodities to Bhutan are all carried out from this gate.