Punakha used to be the old Capital of Bhutan, which was later on shifted to Thimpu. Now it acts as the administrative centre of Punakha Dzongkhag and one of the 20 districts of Bhutan. Punakha lies at an elevation of 1200 mts above the sea level. Punakha is a beautiful valley with a pleasant climate. Pho Chu and Mo Chu, the two major rivers of Bhutan meet in this valley. Punakha Dzong the famous Bhutan tourist Spot is built on the confluence of these two rivers. The main cash crop of Bhutan, rice is cultivated in this valley. Due to the favourable weather conditions and its fertile soil rice grows very well in this region. The famous red rice of Bhutan as well as white rice is grown in the river valley of Pho Chu and Mo Chu. Most of the people in Punakha valley are mostly engaged in farming and agricultural sector. People here mostly cultivate rice and also practice garden farming by growing different types of vegetables and fruits like papaya, orange etc. Long treks can be done in Punakha valley. You can trek to each and every corner of Punakha valley and explore its natural beauty. You can easily accommodate yourself to the hotels and tourist lodges at Punakha Valley for the night stay.

How to reach Punakha:

To visit Punakna the most favourable time seems to be the month of February to April and September to November. Most of the tourists usually visit the place at this time as it gives an opportunity to get the glimpse of Punakha Festival.

Places to visit in Punakha 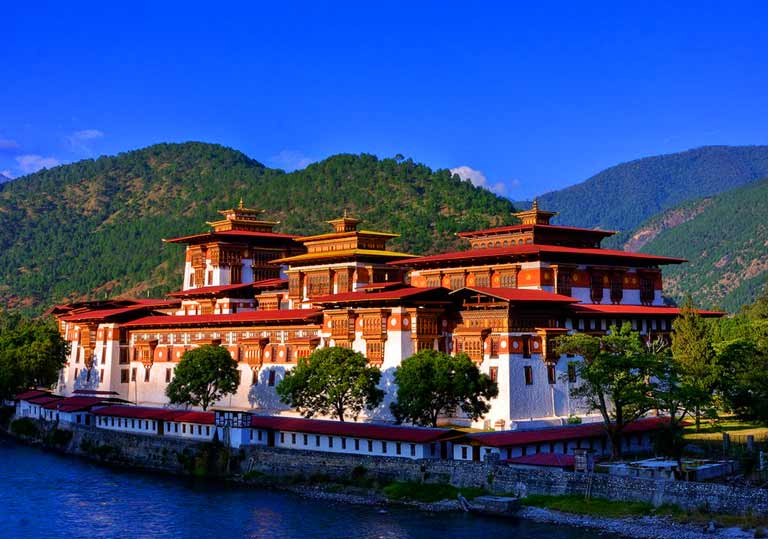 Punakha Dzong the famous Bhutan tourist Spot is built on the confluence of two rivers Pho chu and Mo Chu which is said to be the Father river and Mother River of Punakha Wangdue Valley. Punakha Dzong is the second largest and the second oldest Dzong of Bhutan and its structural beauty is well known too. The materials used for the construction of the Dzong are composed of compact earth, stones and timbers for windows and doors. Punakha Dzong of Punakha is the main spot of attraction of tourism in Bhutan. Pungtang Dechen Photrang Dzong also known as Punakha Dzong is the administrative centre of Punakha Dzongkhag.The Royal Wedding of Jigme Khesar Namgyel Wangchuck and Jetsun Pema was held in Punakha Dzong in 13th October 2011. The interior designing of Punakha Dzong is very rich and the Dzong has been a venue for the coronation of every Bhutanese king. An annual festival known as Demoche is held every year in this Dzong which is also known as Punakha festival. The Punakha festival lasts for 5days which is celebrated in the month of February. Large number of tourists and people from the surrounding villages visit Punakha during this festive season. On the last day of festival the traditional mask dance which is popularly known as Cham dance is performed. The Bridge is one of the second longest suspension bridge of Bhutan which is built across the Po Chu river. The bridge is almost 300 mts long and walking on it gives an unforgettable memory. The bridge is located very close to the Punakha Dzong. A short walk of 10 to 15 minutes from Dzong will take you to this Bridge. If you are visiting the Dzong then don't miss the visit of this beautifully built suspension bridge which also connects the Dzong with Punakha town and the nearby villages surrounding Punakha. The bridge is located at the thrilling height above the swift flowing river Po Chu from where you will get the wonderful view of Punakha Dzong and Pu Chu. If you want to experience the adventurous and thrill then this is the most perfect place for you. It is also one of the best attractions in Punakha where tourists usually visit. The long suspension bridge is full of great views and it will be a great fun with excitements to walk over this bridge. 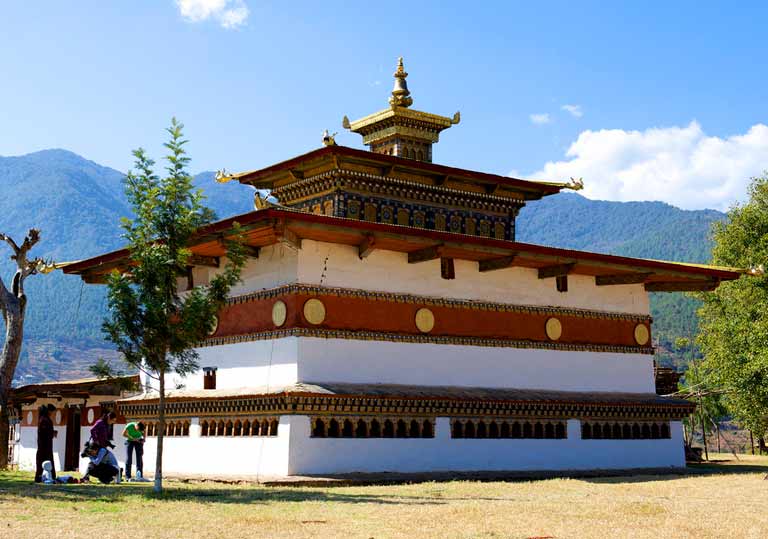 Chimmi Lhakhang is located in the small hill of Punakha 10 kms away at the village named Sposoka which may take about 20 to 30 minutes of walk from Punakha. It is the border land of Thimpu, Punakha and Wangdue Phodrang Dzongkhag of Bhutan. It is one of the Buddhist Temple or lhakhang of Punakha district. The lhakhang has a religious side of History which was founded in 1499 dedicated to Drukpa Kinley. The lhakhang has a Bhutanese architecture and structure. It has been one of the most visited monasteries of Punakha by the young couples for the blessings of child. People from different corners of the country visit this place. For this reason it is also known as the temple of fertility which is said to be the blessings of Lama Drukpa Kuenley. You will get the best view of Punakha Valley from the top floor of this temple. It stands beautifully on the hilly ridge above the Punakha Valley which had taken nine long years to get completed. The Chorten is the best example of Bhutanese architecture and structure. A short trek of 1 hour to the Chorten from the Punakha valley will give you best experience. It is also just a 15 to 20 minutes of walk from suspension Bridge. It is said that the queen mother dedicated the Chorten for the well being of Kingdom and the people living in this Kingdom.